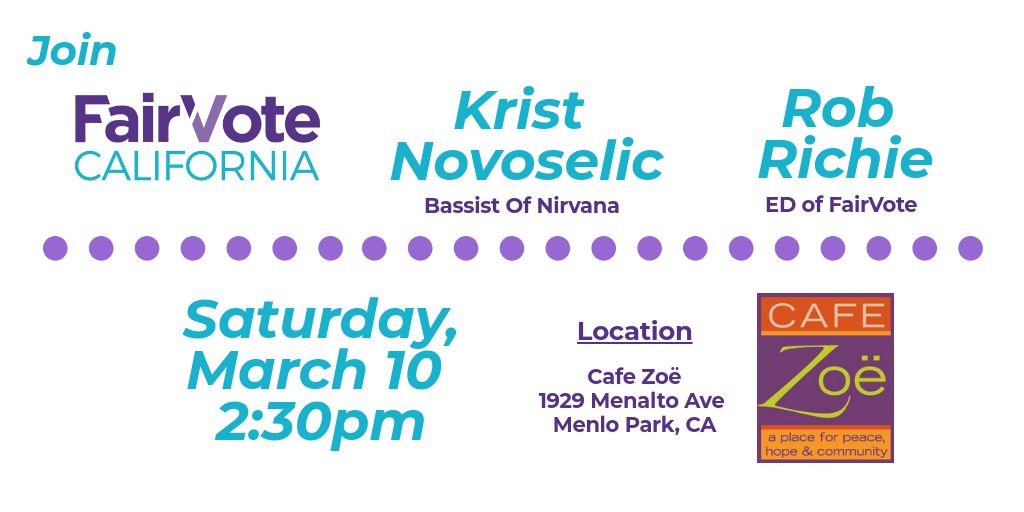 Join FVCA, FairVote Board Chair Krist Novoselic, and Executive Director Rob Richie for an election reform get-together at Café Zoë in Menlo Park, to discuss FairVote's efforts to promote Ranked Choice Voting (RCV) which is not only on the ballot statewide in Maine this June, but also on the ballot in Santa Clara. You'll also have a chance to meet Menlo Park residents who have been working to get the council to consider changes to council elections in Menlo Park.

This event is hosted by FairVote California (FVCA), a project of FairVote, a 501(c)(3) nonprofit organization which advocates for electoral reforms that give voters greater choice, a stronger voice, and a representative democracy that works for all. FVCA’s priority is to implement RCV, a reform that makes democracy more inclusive, fair, and functional. It's a simple change that can have a big impact.

This event is intended to be a fundraiser for FairVote. Please bring your checkbook as we will be asking for your donations to the cause.

Along with being FairVote’s Board Chair, Krist Novoselic was also a member of the groundbreaking rock band, Nirvana. Krist has been featured on The Rachel Maddow Show, C-SPAN, and many other media outlets to advocate for FairVote’s reforms. Rob Richie has been the executive director of FairVote since co-founding the organization in 1992. His writings and opinions have been featured in The New York Times, The Washington Post, NPR’s All Things Considered, and many other outlets.